Daily Cash/Balance of the Month Fundamentals – The EnergyGPS Daily reports details the market fundamentals that are behind the overall implied heat rates in both the day-ahead and real-time markets.

View Sample
Our analysis includes coverage every major North American market including: Our philosophy is tied to the overall supply/demand balance, where we try to find the inflection points that ultimately drive the bilateral and/or auction price in each region.

Term Outlook – Our outlook into the futures is predicated off of understanding how each market operates when it comes to finding the supply that is needed to balance the overall demand in a specific region. Over the years, part of this understanding comes from knowing how the supply stack is changing as each region has introduced some form of renewable energy as well as having coal units retire. At the end of the day, we spend a lot of time focusing on the net load numbers as it begins to tell us how much coal and/or natural gas generation is being consumed on the grid. From such analysis, one can determine how the power grids are changing from month to month and year on year. We also spend a large amount of time dissecting the Pacific Northwest/California hydro system as the water year changes each season.

US Supply/Demand Balance – Daily/Weekly – The Lower 48 natural gas landscape continues to change over the years with production moving on-shore and the introduction of renewables on the power side keeps things interesting. For our daily balance, we scrape each pipeline and map each point to either of the following components: production, rescom, industrial, power burns, imports/(exports) and LNG facilities taking gas off the grid. The sample is uplifted using methodology that gives us a good prediction of how much gas is either being taken out of the ground or put into storage. Each daily number is ultimately rolled up into an EIA week compared to an internal regression storage model. Each outcome is then put up against what is reported by EIA each week when they release their natural gas storage number.

US Supply/Demand Balance – Forecast – The daily/weekly natural gas components are used as a starting point to predict how the grid will operate as we move further out into the future. 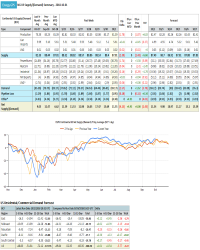 View sample
Once we have a good understanding of the current fundamentals, it is time to ask the question of how is the market changing in both the short-term as well as further out on the curve? The answer lies in researching the infrastructure changes such as pipeline expansion, new production and/or some other regulatory element tied to the natural gas market. On the demand side, power burns has several elements tied to it as the renewable penetration over the years has altered the thermal portion of the supply stack as well as unit retirements and outages. In the West, you also have to have a pretty good grasp on the current hydro season as it swings the natural gas consumption in either direction depending on the amount of snowpack in the mountains. We also spend a lot of time dissecting the coal to gas ratio by region to fully understand which type of unit is taking market share. Rescom is tied mostly to weather, where the winter season is volatile and the amount of gas consumption for heating can swing drastically depending on Mother Nature. When you look at the industrial component, the economy from the local level to international as it dictates how much consumption of natural gas is needed to produce goods throughout the Lower 48. The piece of the puzzle is imports/exports where the former is in the form of Canadian flows entering the Lower 48 at the border while the latter has two elements known as Mexican exports and Liquefied Natural Gas (LNG). All three are tied to the price signal as well as pipeline or train capacity.

Regional Coverage – Beside analyzing the Lower 48 as a whole, we take the time to dive into the regional natural gas fundamentals on a daily basis. 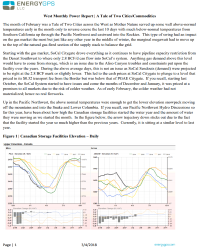 View sample
Our daily reports cover the Canadian, Northeast, South Central and Western markets as well as commentary on the daily North American Supply/Demand balance. We have built out a set of daily dashboards that depict how gas is flowing. Our daily EnergyGPS reports has written commentary by staff members regarding the key fundamental elements driving each market. If there is some sort of market news that cannot wait until the next daily/weekly report, we stop what we are doing and get a market flash out to clients. This EnergyGPS documents dissects how the new piece of information will have an impact on the market and for how long. Our years of being in the energy markets allows us to process vast amount of data quickly and present it in a way that is meaningful to one’s daily activity in the natural gas space.